To play roller skating, it takes a lot of careful preparation from mental to completeness. Because, the equipment used cannot be said to be cheap. For a pair of roller skates, the price can reach millions of rupiah depending on the specifications. Wheeling club founder Lampung Suci Aprodity said personal financial support greatly affects the performance of roller skating players. Because, along with increasing abilities the athlete, the need for roller skates that is used also increases.

Not to mention when going to competitions both at local, national and international levels that have to spend deeply. "Buy shoes yourself, participate in the championship yourself, and if you leave the city you will also fund yourself," he explained to Tribunlampungwiki.com, Wednesday (18 / 3/2020). In this case, the support of the Lampung government is indeed lacking. In contrast to other provinces that are already serious in handling roller skating athletes. The Province of Lampung does not even have a special place for these sports activists from the Netherlands.

Because of that, members of Wheeling Lampung usually practice at the Saburai Sports Center or at futsal venues. "The only place that can be used (on a large scale) is Saburai," he said. There are many oblique assumptions that playing roller skating can damage the existing path. In fact, the wheels on the roller skates are designed to be smooth and do not cause any marks. "In other cities we even play in malls, it is difficult for us at GOR for reasons of fear of damage," he explained.

In fact, so far Wheeling Lampung is classified as active in making achievements. Whether in local, national, or even international championships, the members don't miss awards. "We even always become the overall champion," he said. Suci hopes that in the future the government will be more concerned with the roller skating athletes in Lampung. "It's a shame, we have a lot of athletes but we don't have any support," he said.

Wheeling Lampung Inlineskater To play roller skating, it takes a lot of careful preparation from mental to completeness. Because, the equip... 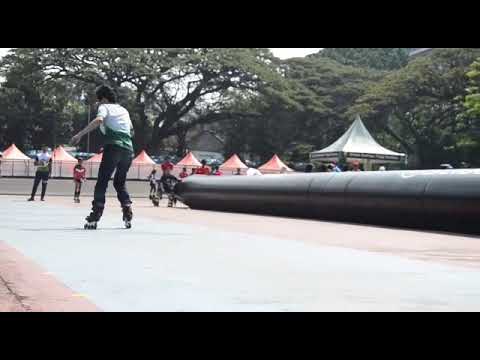